Kid to Kid is a children’s resale franchise founded in 1992 on the principle that “kids grow faster than paychecks.”  Like a growing child, this franchise has grown steadily for 29 years – even as other brick and mortar retailers struggle for survival. Kid to Kid has bought and sold hundreds of millions of quality childrens’ items in stores all across the United States. We even have stores in Portugal, Spain, and Canada! Our franchise recycles millions of items each year in over 100 stores.

When the first store opened in 1992, second hand was considered by many to be second rate. Today, thanks to resale stores like Kid to Kid and its sister concept Uptown Cheapskate (for teens and young adults), second hand is considered chic, smart, and eco-friendly. It’s been embraced by middle-America as an acceptable and even superior shopping option. “That’s because of the way resale stores are run today” explains Kid to Kid founder Shauna Sloan. Today’s resale stores are designed to help sellers and shoppers save money, feel good, and have fun shopping.  “We work to be different, better, and special” comments Sloan.

What makes Kid to Kid special? According to Sloan, “each item is a one-of-a-kind, with about 50 different brands and several hundred items in each size” – which makes shopping fun. Items are priced at a fraction of original resale, so everything’s very affordable – which is also fun. “It’s like hunting for treasure when the treasure is easy to find!” adds Sloan.

At Kid to Kid, parents receive cash on the spot for the things their kids have outgrown. They can also shop from a huge selection of high quality, slightly used replacement items at bargain prices. “It’s a win-win-win for families” explains Sloan. “They earn money for things their kids aren’t using that we can resell. They can donate the items that don’t quite meet our standards to local charities and earn a tax deduction. And they save a huge amount shopping in our stores.” It’s also a win for the community, as millions of dollars are pumped back into the wallets of the local families who buy, sell, and save.

we take giving back seriously

Many times a week, local charities pick up hundreds of donated children’s clothes and toys to distribute to families around each store. Foster parents and military families get ongoing discounts on product in the store. And any family can receive 12 free books a year when they spend $30 and sign up for the Kid to Kid book club. We also donate 5 cents to charity when customers opt out of taking a one-use plastic bag. These are just a few of the ways we give back to our local communities. But our commitment to make the world better doesn’t end there.

There are children in villages all over the world attending schools that don’t offer adequate classroom facilities. They meet inside huts, are taught under trees, walk miles to neighboring villages, or don’t go to school at all. Kid to Kid franchisees believe that education is a basic human right and the key to breaking the poverty cycle. We’ve partnered with buildOn and our sister concept Uptown Cheapskate to end this vicious cycle by building schools in the developing world.

Kid to Kid hosts annual Charity Fill-A-Bag sales at our local stores. 100% of the proceeds go to building schools with our partner buildOn. These Fill-a-Bag Sales are exactly what they sound like: Customers pay a small donation (around $20) and are able to stuff as many donated items into the bag as they can. All of the money goes directly to buildOn. Since 2015, we have built 15 schools in the world’s most underserved nations including Haiti, Nicarauga, Nepal, Mali, Senegal, Burkina Faso, and Malawi. 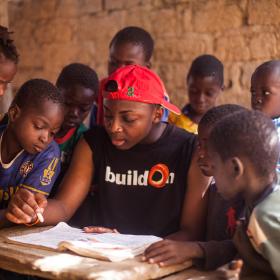 follow us and join the sustainability with style conversation

For 29 years Kid to Kid has been paying families to recycle their great kids’ stuff. Thank you for being a part of the caring, sharing community at Kid to Kid!